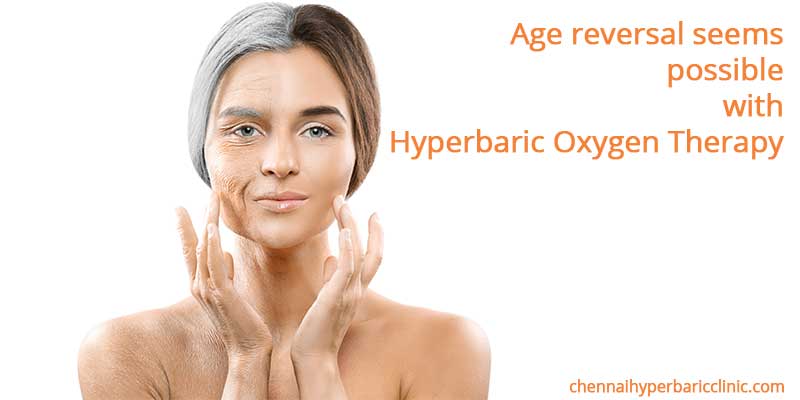 Heard of quotes like “40s is the new 20”, “40 is awesome”, “you are 50 years young!” etc? Whatever people may say, the fact that your body is aging is undeniable. Physical stamina/strength and cognitive abilities will decline. This is common to everyone. The only difference is, for some, this happens faster and for some, this happens little slower depending on their life style, diet, workout routine, medical conditions etc.

There is good news to all of you (and us too)! Not just good, it’s great news that came from the extensive research by Israeli medical research team. Thanks to them and to the advent of new technology, HBOT (Hyperbaric Oxygen Therapy), they were able to reverse the age of the human body at a cellular level by 25 years. Doesn’t sound exciting? Imagine how energetic and healthy you were 25 years ago!

How does a human body age?

How does a human body age or what are the scientific reasons why a body ages? There are two parts to the answer:

Telomeres are like little caps at the end of our DNA that make up our chromosomes. They protect the tips of the chromosomes from sticking to each other and they also play an important role in DNA copying when the cells divide to regenerate new cells. For simplicity sake, imagine your shoe lace as your chromosomes and the end plastic tips as the telomeres that protect the lace.

Every time when cells divide to regenerate new cells, a minute fraction of telomeres is lost in the new cell, making the length of the DNA shorter. This is believed to cause aging where the body loses strength/stamina and brain loses cognitive abilities bit by bit. This shortening of telomeres happens continuously and at one point, it stops. That is the stage when a cell can no longer divide to regenerate new cells. Such ‘incapable cells (of regeneration)’ are called ‘Senescent Cells’. Senescent cells loses the ability to repair when they are damaged, they age and eventually die off.

Hayflick Limit – A researcher named ‘Leonard Hayflick’ found that a normal human body cell divides up to 50 times before becoming a senescent cell. Thus the 50 limit of division of cells is called ‘Hayflick Limit’.

It is known that smoking, obesity, lack of physical activity, vitamin deficiency and inflammation speeds up the reduction of telomere’s size, directly affecting the lifespan of a person.

Build up of Senescent Cells in the body

Once the cells reach the Hayflick limit, they stop dividing and become inactive/senescent. The increase in number of senescent cells is also one other reason for body aging as believed by the scientists.

As of now, medicines are being invented that can stop the shortening of telomeres and get rid of the senescent cells in the body. Experts advise a healthy life style, maintaining optimal weight, high intensity workout every week for 6 months to extend the length of telomeres by 5%. So far, that’s the best they could achieve in their process of trying to reverse aging of human body. They consider aging as a disease rather than a natural process that everyone undergo. They also consider that aging is the primary reason for Alzheimer’s, Parkinson’s, arthritis, cancer, heart diseases, diabetes and cognitive denegration.

“Since telomere shortening is considered the ‘Holy Grail’ of the biology of ageing, many pharmacological and environmental interventions are being extensively explored in the hopes of enabling telomere elongation”

said one of the scientists involved in the research at Shamir Medical Center in Israel.

What exactly was done in HBOT Therapy that increased the length of telomeres?

35 people took part in the research out of which 5 were excluded due to their loss of interest and other medical conditions. Each of these 30 individuals underwent HBOT therapy for 90 minutes every day for 5 days in a week. The sessions were continued for a period of 3 months after which the measurement of their telomeres was done.

When an individual is in the hyperbaric chamber, 100% pure oxygen will be filled in the chamber at 3 times higher pressure than normal atmospheric pressure. This results in excess oxygen dissolution in the tissues in the body and mimicking the situation of ‘hypoxia’ or oxygen shortage. This situation is believed to result in regeneration of new cells in the body.

After 3 months, the length of telomeres and the quantity of senescent cells was measured and the results baffled the scientists. Here are the research results:

Here is what Dr. Shai Efrati, MD had to say after the study:

“The significant improvement of telomere length shown during and after these unique protocols provides the scientific community with a new foundation of understanding that ageing can indeed be targeted and reversed at the basic cellular-biological level.”